We all know to be aware of pickpockets. Even if did not include tips on watching your pockets when outdoors, life itself provides opportunities to learn the simple rules. The same can be said with hackers. Today, widely publicized hacker activities on the Internet are known even to children. 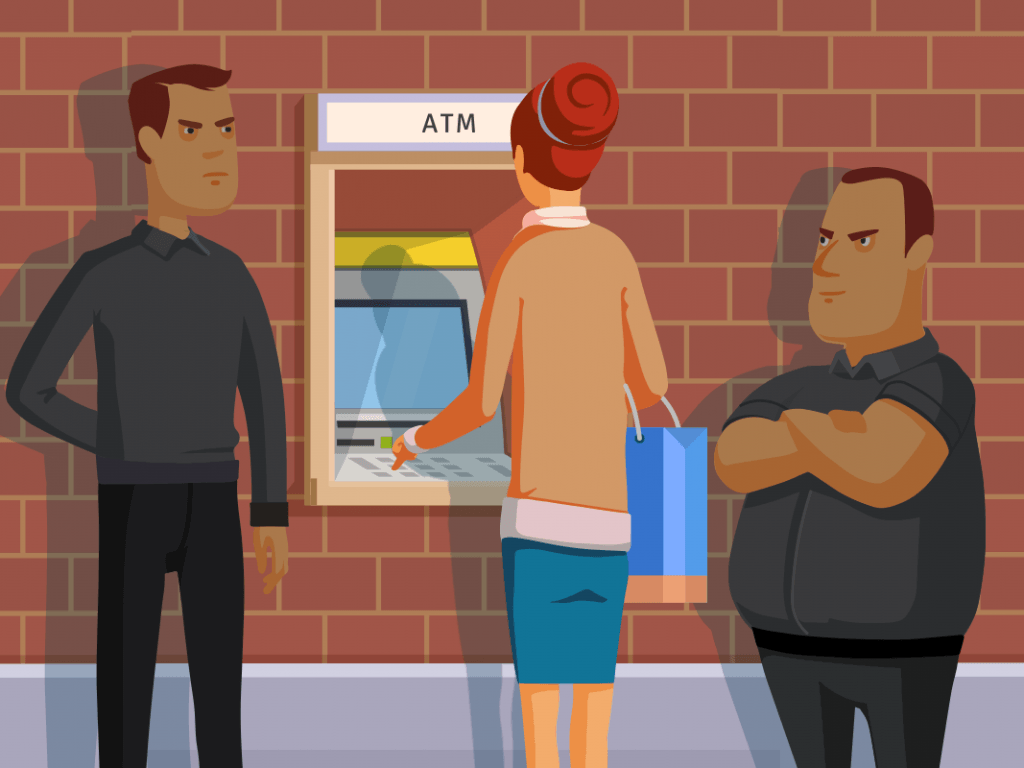 But skimmers enjoy less popularity, which is too bad since you run a relevantly high risk of falling victim to their activity. These carders specialize in stealing card credentials with the help of miniature, stealth hardware on ATMs. Even with the combined effort of police, banks, and payment systems, the amount of money stolen from card accounts to grow.

Skimmers are a little like pickpockets (they use similar palmistry skills) and, to a lesser degree, they’re a little like hackers, too – what they do is not possible without employing some hi-tech and PC tricks.

To become their target, you just need to use your debit card to cash. If your card is not equipped with a chip, the situation is worse for you and better for them: non-chipped cards are stripped of money a lot easier. To increase your chances of falling victim to skimmers, just skip the option of SMS notifications from your bank, insert your card into any ATM you see on the street, and proudly show off the PIN you enter. You’d make skimmers extremely grateful. 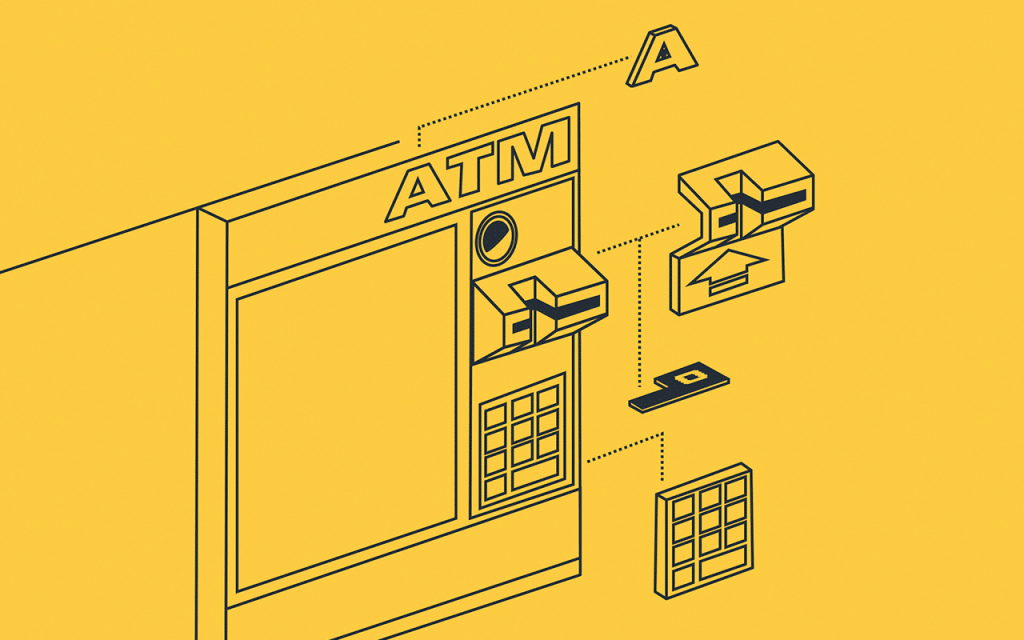 On a serious note, this illicit business has grown and evolved over the years. Its principle remains the same: Use stealth techniques to read data from the magnetic strip on a card, look up the PIN code, clone the card and the maximum amount of money from the corresponding bank account. However, the data theft techniques evolved greatly.

There were times when skimmers used DIY card readers, installed clumsy hardware on ATM input trays, and risked getting caught in the act when extracting the data manually. Times have changed. The industry has moved on, and DIY skimmer enthusiasts are extinct. Today, skimming is a well-organized and highly automated process.

The first link in the process chain is producers and sellers of ready-made hardware solutions made of massively available components. The deals are made online, and the goods are shipped via courier services – this is safest for the criminals.

If you don't see a skimmer on that ATM, it might be because the ATM IS the skimmer – http://t.co/0UGr3HpQPK

To see the proof of how widely popular skimming hardware is, just type in a simple request in any search engine. Kits containing a stealth reader to extract data from a plastic card, a vanity panel to get PIN codes, and a cloning device bundled with corresponding are sold for as much as $1500 – $2000. A couple of years ago such offers would go as high as $10,000, as estimated by Brian Krebbs, an infosec expert.

Buyers of skimming bundles needn’t be proficient hackers: They are offered detailed manuals, some even containing a ‘best practices’ section. The instructions are so detailed they go as far as including recommendations of proper first-time battery use to ensure a reader enjoys a long battery life.

First, experienced criminal vendors sell hardware barely distinguishable from original ATM components. Even a conscientious user wouldn’t be able to tell them apart: The foul input tray is made of the same sort of plastic and is of the same color as the legitimate one. And the shape of the fake is only slightly different. 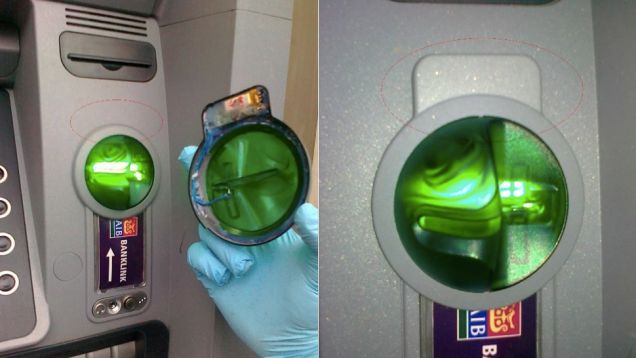 This similarity is achieved through a deliberate adaptation of ATM elements in widely used models – any has major banks serving a lot of clients. Of course, banks use anti-skimming techniques as a counter measure.

Secondly, there are readers by skimmers inside ATMs through the input trays. This novelty was referenced in the recent report issued by European ATM Security Team, a non-profit organization. Even worse, some such devices do not bother to read the magnetic strip — they use ATM’s own resources to do that.

This New Card Skimmer Is Almost As Thin As A Credit Card http://t.co/rvXS3W5HVa by @johnbiggs

why GSM-based ATM skimmers are the "best," according to skimmer makers http://bit.ly/dKRrrp

Since then, getting a PIN code remains the weakest link. In order to look up PINs, culprits use miniature stealth cameras or even ordinary mobile devices like an iPod Touch, which is notable for its slim Z-height and powerful battery.

A camera is installed above the keypad or elsewhere in the room. Skimmers are particularly fond of brochure stands where banks usually exhibit their materials. As an element of any bank interior, they are hardly perceived as something dangerous.

However, if a person trying to cash covers the pad with their hand, the camera is no longer of any use. Also, video is not very convenient to send or process, and requires a lot of manual labor.

Slim vanity panels for ATM key pads are getting a lot cheaper and are now priced at less than a thousand euros on the black , further complicating the situation. There is no use covering the pad anymore – the panels will still detect your PIN. Sending a 4-digit code in an SMS to a skimmer database is a lot easier than processing long videos, and the whole process is a lot more automated.

Of course, the vanity panel visibly protrudes over the original keypad, but hardly any user would closely examine the pad and look for clearance. From above, the whole construction looks very average – vanity panels are made using the same steel and quality paints as original ATM keypads. 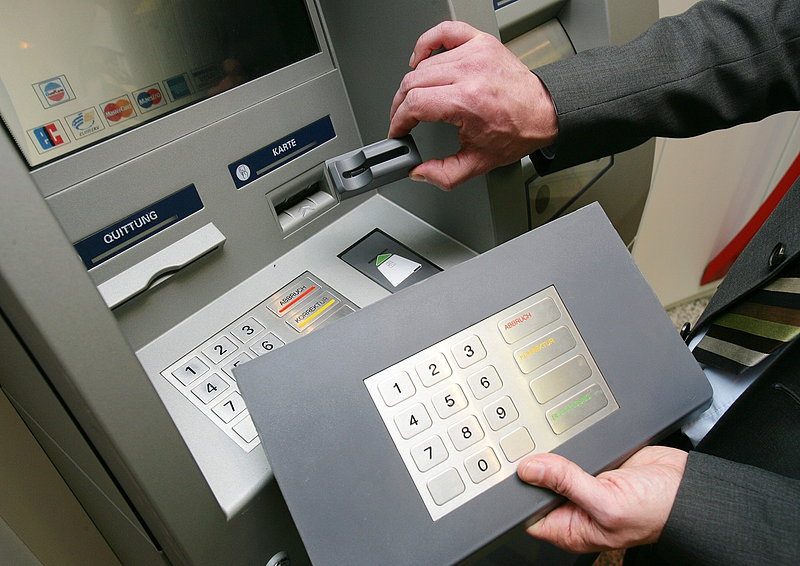 There is one more technique skimmers use: They guard the they use for decoding and cloning the information. This is how carders protect themselves from competing skimmers and law enforcement officers.

Should an incorrect password be used, the skimming software would not inform the user it’s incorrect – it would simply shut down. Giving any incorrect plausible password to the police, a skimmer says the program is just a harmless small piece of software he recently . Oh, and what a shame it won’t start…

To prove it was a used for illicit activity, law enforcement officers have to employ qualified specialists to analyze the code, which is a painstaking and time-consuming process.

With all that said, tech is just part of the story. Many skimming operations remain manual and very risky. We will relate that part of the story in our next article and give you some tips to protect your bank account from the culprits.

Reading may be harmful

Are you getting enough sleep at night? If not, it might be because your sleep pattern is disrupted due to the display on your PC, TV, tablet, and smartphone.