In a three-month period this year, Kaspersky Lab products detected and prevented nearly 1.5 billion attempts to infect users’ computers. These included attacks on mobile devices and malware targeting Mac OS X, but the majority of reported incidents affected Windows– the most popular platform for home users.

The huge number of Windows computers is the main reason attackers focus on this operating system. Few cybercriminals are still in the game for thrills – they are far more interested in making money. As far as they are concerned, the more potential victims there are, the higher the profit. As a result, Kaspersky Lab detects an average of 125,000 new malware samples every day and most are designed for computers running Windows. Such a high figure is due to the relative ease with which new malware can be developed based on existing samples. There are even special programs for lazy or inexperienced cybercriminals that assemble viruses or Trojans from existing fragments of code. But there are also more sophisticated malicious programs that cost tens of thousands of dollars to develop. 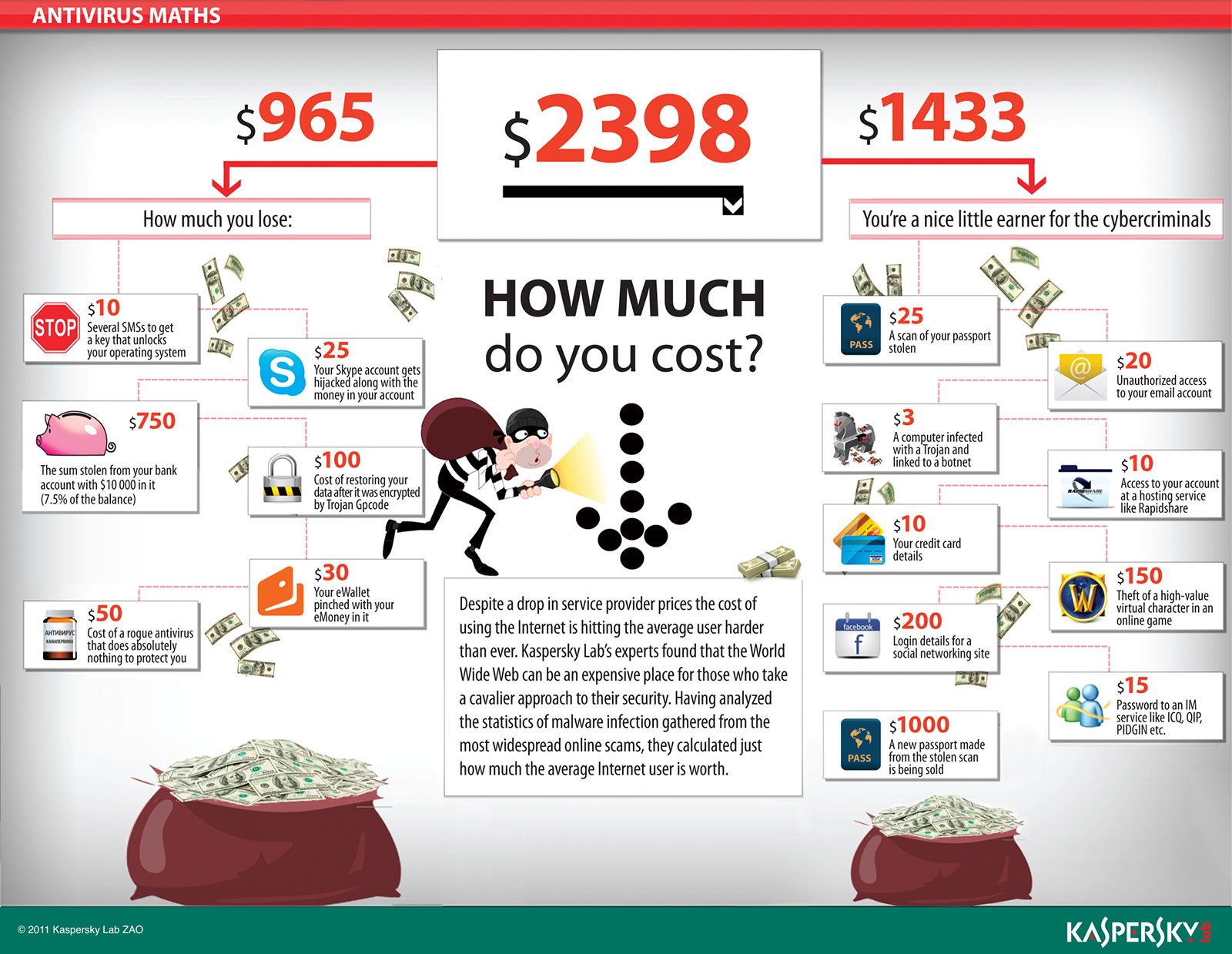 The cybercriminals’ goals are changing along with the targets of the malware they create: instead of viruses that disrupt the operation of a system, the fraudsters are eagerly using Trojans designed to steal confidential data without announcing their presence on the system. Financial information (user credentials to access online banking accounts, credit card numbers, etc.) is a priority, but they will also not squander any opportunities to pick up any other information. For example, an account on a popular social networking site can be sold to spammers who specialize in spreading messages containing ads or links to infected sites. In general, cybercriminals can sell almost anything, even computing power, i.e. a special malicious object that makes a computer part of a botnet used for DDoS attacks or spam distribution.

There are other interesting money-making schemes in addition to data theft. For example, blackmail is a popular choice. A ransomware Trojan blocks any user activity on the computer and displays a notification, usually an obscene picture. The picture urges the user to send an expensive text message to a specified number in order to receive a code that will unlock the computer. Of course, no messages should be sent. Services such as Kaspersky Deblocker should be used instead.

The Internet has become a constant source of these kinds of threats. In the second quarter of 2012 Kaspersky Lab products repelled over 400 million attacks launched from web resources worldwide. These figures suggested we saved gigabytes of data from attack – not to mention reducing the angst endured in trying to combat an infected system.

The overall situation regarding Windows threats demonstrates the pressing need for comprehensive protection offered by such solutions as Kaspersky Internet Security 2013. The product actively interacts with the Kaspersky Security Network cloud service. Web antivirus significantly reduces the risk of computer infection after visiting a compromised site. Anti-spam technologies protect against unsolicited correspondence, including phishing emails that are designed to steal information. The list could go on and on, but the overall conclusion is that the number of threats to Windows will grow and you need to be ready for what’s next.

With the holiday season upon us Kaspersky Lab put together some tips for safe holiday shopping!