When it comes to the dangers of oversharing information through social media, Twitter and Facebook come to most people’s minds. And while we’ve written about the dangers of exposing your physical or geographic locations through Foursquare, the popular checking-in platform has become the vehicle for other types of danger. 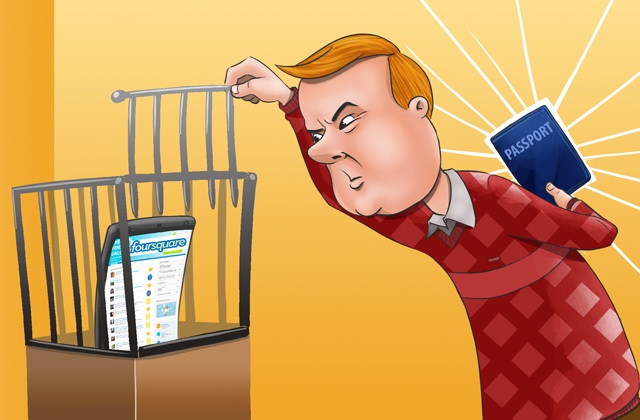 There is a Twitter handle that shames/torches people who tweet pictures of their debit and credit cards — yes, people actually do this — and maybe Foursquare needs some sort of equivalent. Too many Foursquare users unwittingly expose sensitive personal information by using the app’s photo features to upload images of what they’re doing wherever they are. Too often, this can include sensitive data. This is increasingly happening at places where personal data is combined with long wait times — namely, embassies, visa offices, motor vehicle administrations, etc. It’s no surprise that people would be on their smartphones in such places, but the tendency to share images of passports, driver’s licenses and the like to show their friends… whatever it is they are trying to show is a dangerous one.

Obtaining sensitive data is all too easy for attackers who prey on social media users precisely because they know that people tend to overshare.

Passport numbers, social security numbers, home addresses — this is as sensitive and personally vital as data gets. And once it goes online, you should assume anyone will see it, especially since Foursquare images aren’t even restricted to Foursquare users. All of which makes obtaining such sensitive data all too easy for attackers who prey on such check-in spots precisely because they know that people will do this.

Another threat that Foursquare has battled is phishing, which is when attackers try to obtain from users vital information like account logins or credit card numbers by posing as legitimate entities. Phishers are increasingly using Foursquare’s popularity to their advantage, sending users phony friend confirmation emails that include bad links that, instead of linking out to a user profile as purported, instead jump to sites loaded with malware. Foursquare recommends users not click on links in friend requests just to be safe, and as always social media users should be extremely cautious about friend requests or messages from anyone they don’t recognize.