One of the little compromises that we’ve all had to make to get the advantages of mobile apps is the blind acceptance of the terms of service for the app stores. They are long multi page long documents full of legalese that most people couldn’t fully decipher even if they bothered to read them.

Not surprisingly, few people actually get that far. Most simply click the “Accept” button and move along. A new poll on the Kaspersky Lab Facebook page shows that 35 percent of respondents never bother to read the terms of service for the Apple iTunes Store, Google Play or Windows Live Store. Given how dense and wordy those user agreements are, it’s not that shocking that so few people give them a cursory look.

The length of the documents puts most users off. Indeed, 31 percent of the respondents said that they’d like to read the terms of service, but they’re intimidated by the number of pages. Consumers in the past have complained about the length of similar documents, including software end-user license agreements, which often can run dozens of pages and contain so many dependent clauses and if-then statements that they end up being inscrutable. 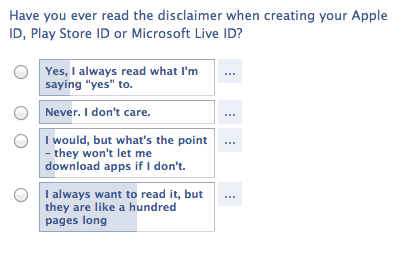 Still, 22 percent of users say that reading the agreements is a waste of time, given that even if they find something they object to in the terms of service, they really have no recourse. If a user refuses to accept the terms of service, they won’t be allowed to download apps from the store. For iPhone users, the App Store is the only legitimate source for apps and the devices won’t run other apps, unless it has been jailbroken. Android users do have the option of finding apps in alternative, third-party app stores, but these are infamous for having malicious apps.

The end result, it seems, is that regardless of whether you read the terms of service, you’re going to end up accepting it one way or another. If you want to actually use your phone, that is.

How to Shop Safely Online

The days of retail shopping during the holiday season have given way to the age of E-tail: Experts predict that more shopping will be done online than in physical stores