Everybody knows that nothing on the internet really goes away forever – except for maybe our privacy and dignity. So when we heard about SnapChat: a service that allegedly lets users share photos and videos that are only viewable for a predetermined number of seconds before being deleted forever, we were incredulous. 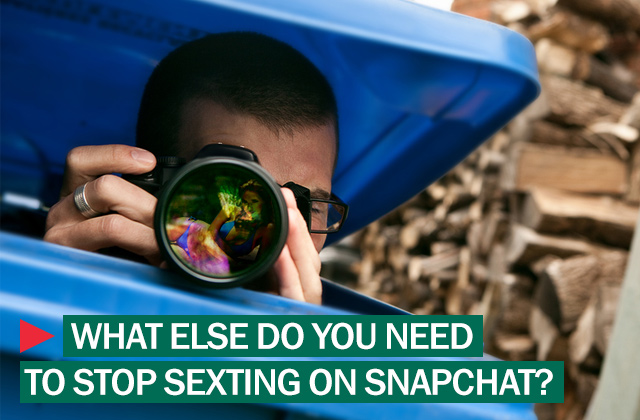 Anyone who stopped to think about it for even a second must have been at least a little skeptical, but that skepticism wasn’t enough to prevent SnapChat from becoming wildly popular, nor did it prevent the service from meeting it’s true potential: sure, sending racy pictures with the cell phone has been a thing for as long as phones have had built-in cameras, but those pictures didn’t go away. That ex-boyfriend-you-thought-would-love-you-forever probably still has any pics you may or may not have sent him all those years ago. SnapChat seemed to change that.

Sure enough though, nearly as fast as it became the new thing, people were finding ways to circumvent this unbelievable gone-from-the-Internet-forever business. It was as easy as taking a screen-grab. Now, SnapChat would inform the sender if the recipient took a screen-shot, but that is little consolation depending on how potentially humiliating the SnapChat was in the first place.

To be fair, I think the whole sexting angle is a bit overplayed here. I have SnapChatted. I’ve seen others SnapChat. Within my very limited, not-statistically-significant sample, I have never had the good fortune of receiving or witnessing the reception of a sext. In fact, the vast majority of “snaps” that I have borne witness too weren’t even remotely humiliating, causing me to question why they would need to disappear in the first place.

Either way, the service touts itself as a place where you can discreetly share pictures or videos online that will go away forever. The whole sexting thing is hyperbolic to a point, because even if the picture of video you are sending is completely trivial, you are still sending it under the pretext that it will disappear forever, and therefore, you deserve to expect that that should in fact reflect reality.

Unfortunately it does not reflect reality. Not only is the permanent deletion not true technically but there is an application called SnapHack that quite literally subverts SnapChat’s central selling point. In its developer’s own words: “Save your snapchats to your camera roll without the sender knowing and view them as many times as you like for as long as you like! No more 5 second glimpses.” This is even more malicious than taking a screen-grab because the sender doesn’t even know that the picture is being saved.

It has also emerged that law enforcement can issue warrants demanding that un-opened SnapChats be handed over for investigation.

I think it is now completely safe to say that SnapChats do not go away forever. If you don’t care that SnapChats don’t go away forever, then fine, I won’t judge you. SnapChat away to your little heart’s content. However, if you’ve been assuming that these SnapChat interactions are indeed fleeting, then you ought to rethink that, because they clearly are not. Just remember that once something is online, whether that something is potentially damaging to your reputation or not, it’s probably there forever, regardless of what some mobile application developer claims.

What’s the Deal with Adware on Android?

In most cases, the “free” Android applications you download from Google’s Play store aren’t free at all. These developers aren’t just developing apps for you out of the kindness of